The Death of Phoenix

Perhaps the most well-known Unpublished X-Men story was the original ending to X-Men #137, where Jean Grey lived.  Of course, this was rectified rather quickly when the story was published in Phoenix: The Untold Story in 1984.  This issue publishes the entire story with the original five page ending that was changed due to an edict by Editor-In-Chief Jim Shooter. 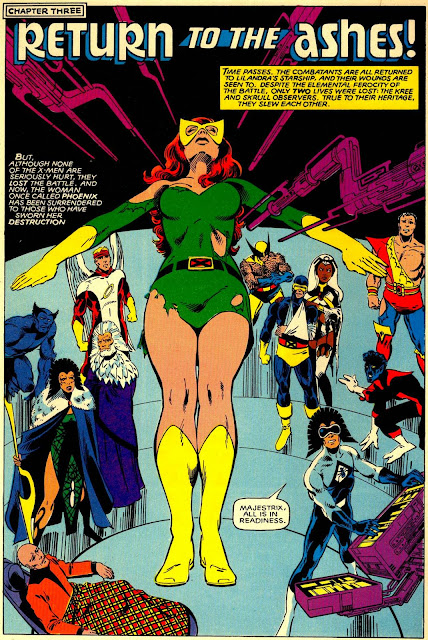 "The ending of the story was a matter of intense controversy with the editorial staff. Jim Shooter's recollections are that the original intent of the Dark Phoenix storyline was to introduce Dark Phoenix as a cosmic nemesis for the X-Men. This was what had been discussed originally amongst the creative team and Shooter, and this was the story development that had been approved. When Uncanny X-Men issue 135 was in the final artwork stages, Shooter happened to look at the proofs for the issue and noticed that the story included the destruction of an inhabited solar system, with an explicit mention of billions of lives lost. Louise Simonson feels it was Shooter's outrage over this plot element which led to him taking editor Jim Salicrup off the series several issues earlier than he'd been scheduled to." 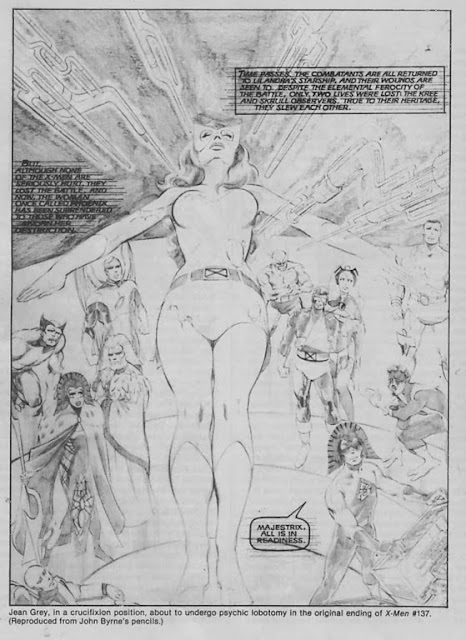 "Upon questioning Salicrup about where the plot went from there, he was told that issue 137 ended with Jean being permanently depowered by the Shi'ar and released into the custody of the X-Men. Shooter disagreed with this development both from a storytelling standpoint as well as, secondarily, a moral standpoint, likening the ending to "taking the German army away from Hitler and letting him go back to governing Germany," and finding it out of character for the X-Men to retain friendly relations with a being who had committed genocide. Byrne and Salicrup explained that they had no problem with this resolution because they had always thought of Dark Phoenix as a separate entity who had possessed Jean Grey, with Salicrup drawing an analogy to the film adaptation of The Exorcist: "In the movie there's this little girl who's taken over and several people get killed, but by the end, when the demon's gone no one thinks, 'Let's kill that murderous little girl.'"However, on reading the issues over they agreed with Shooter that from the reader's perspective, she did not seem to be possessed, and Claremont admitted that while writing the Dark Phoenix Saga he was never clear in his own mind whether Jean Grey was possessed or her actions as Dark Phoenix were her own." 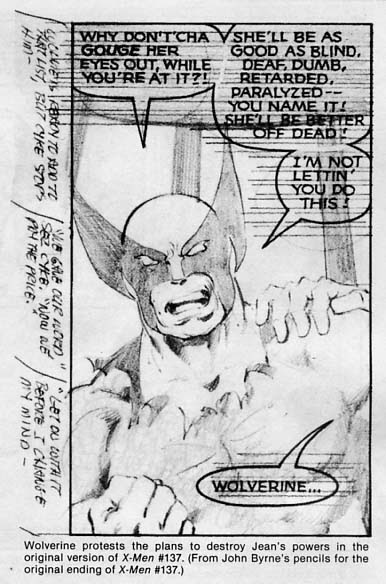 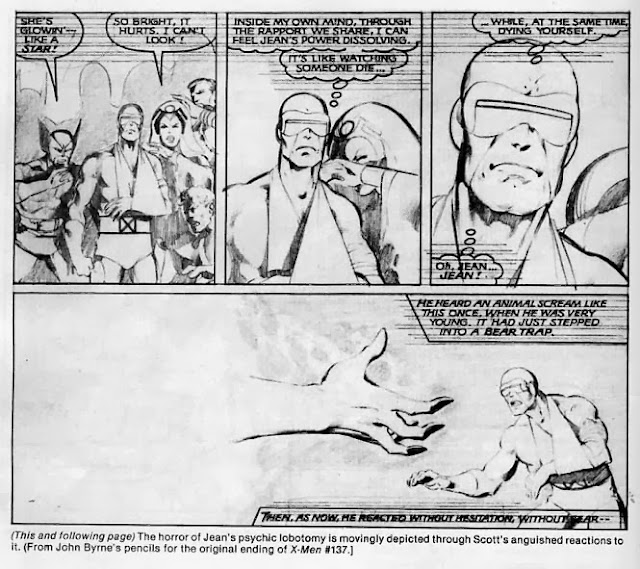 "Shooter, during a conversation with Claremont, suggested a scenario where Jean would be permanently imprisoned as a compromise, and Claremont responded that such a scenario was unfeasible since in his opinion, the X-Men would want to continually try to rescue Jean from imprisonment. Shooter claims that Claremont suggested having Jean die at the end out of frustration. Although Shooter claims that the suggestion was a bluff by Claremont, playing on the unwritten rule that main characters were not to be killed permanently, he accepted the idea. Ultimately, it was decided by Byrne and Claremont to have Jean commit suicide after her Dark Phoenix persona resurfaces at the climax of the fight against the Imperial Guard. Issue 137 was left largely unchanged, but the last five pages were completely rewritten and redrawn for the new ending, and Claremont also took the opportunity to write a second draft of his script. Because of this, comparison of the original and published versions of X-Men #137 reveals numerous differences in the script with no connection to the ending; for instance, in the original version of the day of rest, the individual X-Men are each thinking of their own personal issues, while the published version shows them reflecting on their decision to protect Jean." 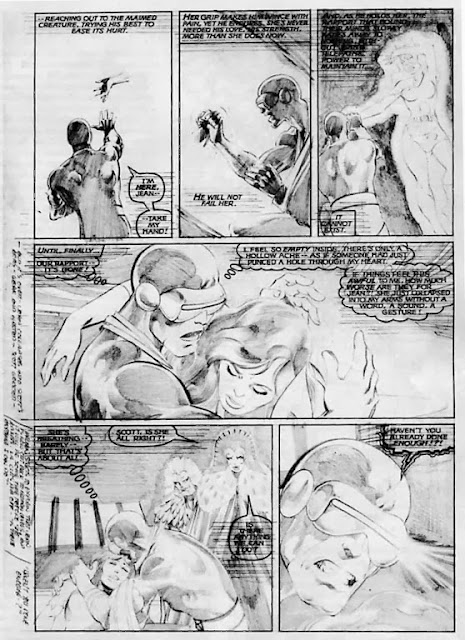 "The original ending ultimately saw print in 1984 in Phoenix: The Untold Story. Besides the original version of Uncanny X-Men #137, it featured a transcript of a round table discussion between Claremont, Byrne, Simonson, Salicrup, Shooter, and inker Terry Austin, discussing the story behind the original ending and why it was changed." 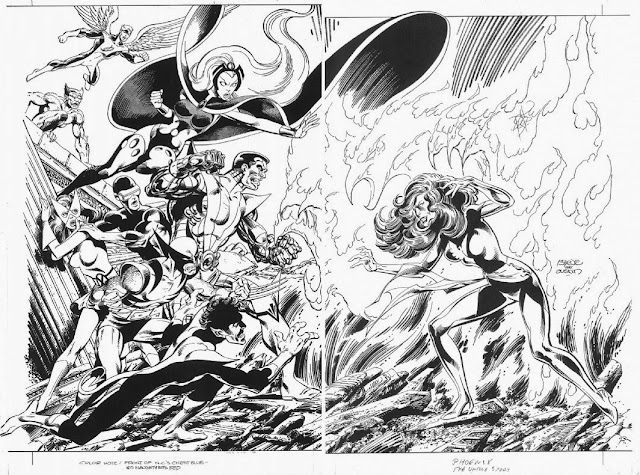 Original cover art from Marvel Comics of the 1980s 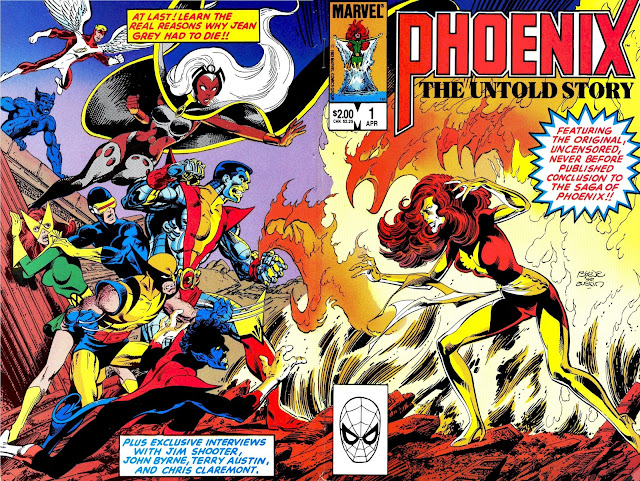 On a side note, in theory this issue is supposed to take place in the alternate reality in which Rachel Summers is born, leading to Days of Future Past.
Posted by CitizenX at 6:00 AM